From the Beginnings to the New Iwate Medical University

Shunjiro Mita, the founder of what would later become Iwate Medical University, lamented the poor medical care conditions in Iwate. In 1897 he acquired the Prefectural Hospital which had been closed, and established Iwate Hospital; in 1901 he established Iwate Medical School, the first private medical university in the Tohoku-Hokkaido area, with Iwate Hospital as a practicum site.
However, Iwate Medical School was closed in 1912, its 11th year, due to a medical education reform. After that, from around the end of the Taisho period, there was a nationwide trend to establish medical schools; in February 1928, Shunjiro Mita’s passion and efforts were recognized, and Iwate Medical College was established. Iwate Medical College lasted for over 20 years, during which Shunjiro Mita and Sadanori Mita served as presidents, from 1928 to 1942 and from 1942 to 1950, respectively.
On June 18, 1947, the school was reorganized as Iwate Medical University, as a result of the post-war educational reform, with Sadanori Mita as the first president. In 1951, an educational corporation was established, and a new Iwate Medical University was launched, and it established itself as a community-based private medical university.

Advances, and to the Present : Unremitting Development 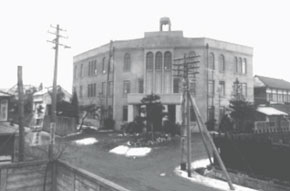 Dr. Shunjiro Mita, the school founder, obtained the Prefectural Iwate Hospital from the prefecture and established Iwate Hospital, a private hospital, in Uchimaru, Morioka. He also established Morioka Medical Training School and Midwifery and Nursing School on the premises. For the director of Iwate Hospital, he invited Yoshiro Sugitatsu from Tokyo Imperial University; the hospital was operated with 2 doctors, 16 medical specialists, 3 pharmacists, 15 midwives, 61nurses, etc. In 1901, the Medical Training School was reorganized as Iwate Medical School, and was authorized by the Ministry of Education, Science, and Culture to be established. In 1912, however, the school was closed due to a medical education reform.
Though Iwate Medical School was closed, Iwate Hospital continued its operation and prospered; old business records show that patients flocked to the hospital day in, day out. With Iwate Hospital as a backdrop, the medical school would revive in February 1928, with the approval of the Ministry of Education, Science, and Culture, as Iwate Medical College (present-day Iwate Medical University).

Inazo Nitobe visited Kawauchi on the Shimokita Peninsula on August 16, 1928. Kawauchi was the land to which Inazo’s great-grandfather Koretami Nitobe was exiled from Morioka-han domain. The following day, he visited Mt. Osorezan and stayed at an inn, but during the night he suffered from severe diarrhea. He did not get any better the next day, so he took the Tohoku Line train and arrived in Morioka in the late afternoon of the 18th, and was admitted to Iwate Hospital. Three days later, he was discharged. On the 21st, he took the 1 p.m. train from Morioka and arrived at his vacation home in Karuizawa, Nagano, the next day. The photograph is from when he was hospitalized. From Morioka to Karuizawa, Ms. Mitsu Shimotomai, a Tokyo Women’s Medical College student, accompanied Inazo. It was June 18, 1928, when Iwate Medical College, the predecessor of Iwate Medical University, had opened—exactly two months later, Inazo Nitobe iwas admitted to Iwate Hospital, the college hospital, as if he was checking out the college’s future prospects.
Years later, Iwate Medical University would enter into a friendship agreement with Johns Hopkins University, known for its world-renowned medical program, where Inazo Nitobe studied. It is a strange coincidence that the two universities would come to have research exchanges led by young doctors.

Many of you probably have heard of Kenji Miyazawa, a poet and writer of children’s tales from Hanamaki, Iwate. Among his works is a poem titled “Iwate Hospital.”
In April 1914, he was admitted to Iwate Hospital (present-day Iwate Medical University Hospital) for a hypertrophic rhinitis surgery. The poem was written in his later years, reminiscing the days of the hospitalization; Iwate Hospital was indeed was a place filled with unforgettable memories for Kenji.
He had fallen in love with Mine Takahashi, a nurse at Iwate Hospital. She was his first love. This was a widely-known fact among Kenji scholars, but there was little information on Mine.
Since Kenji and Iwate Hospital had this unique link, the editorial staff of the university parents newsletter decided to investigate what had become of Kenji’s first love and report it in the newsletter. We approached from various angles, such as searching old staff records and asking Kenji scholars in Morioka. We were hoping to at least find a picture of Mine, but we found nothing new.
Tatsuo Makino, a Kenji scholar who has written Miyazawa Kenji: Universe of Love, said: “It was most likely Kenji’s one-sided love. But he had told his parents he wanted to marry Mine. Kenji was quite a self-confident man, so he probably was convinced he was going to marry her without even asking her.” Another scholar Masanobu Yoshimi analyzed: “Mine got married and moved to Hokkaido;
her son lives in Sapporo. When I asked him about his mother, he said he hadn’t heard anything about Kenji from her. Kenji probably did like her, but probably never told her about it and only wrote about it in his poem.” We’re sure many of you would like to know more about Kenji’s first love. But at the same time, we also feel that we should leave it alone as it is a precious memory for Kenji. 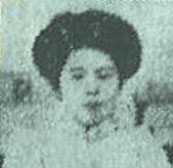 [A Photograph of Mine Takahashi, a nurse at Iwate Hospital, was found.] In the last issue of the parents newsletter, we featured Kenji’s first love, an Iwate Hospital nurse named Mine Takahashi. We had not been able to find a picture of her. However, after the publication of the last issue, we happened to find a picture of Mine Takahashi in the third issue of the Kurima magazine (Bungeishunju, Jan. 1, 1981), which featured Kenji Miyazawa.
The photograph was credited to Seiichi Gifu. We investigated who this Seiichi Gifu was, and found out that, born in Iwate in 1910, he was a friend of Kenji’s and the author of Kenji Miyazawa: His Love and Sex (Geijutsuseikatsu-sha, 1972, in the Iwate Prefectural Library). In Mr. Gifu’s book, Kenji’s poem “Iwate Hospital” is discussed: “Regardless of when this poem was written, it is undoubtedly a memento of Kenji’s first love.” The photograph of Mine Takahashi is thought to be provided by a reporter of the Iwate Nippo, a local newspaper in Iwate, who spent three years in search of her photograph. It was also noted that the photograph was also included in a book called Kenji Miyazawa and His Environs, which was published as a 70th anniversary project of Iwate Agriculture and Forestry College (present-day Iwate University Faculty of Agriculture), where Kenji had learned.
In the photograph, Mine Takahashi has a round face and a serious expression. She must have looked kind and pretty to Kenji in the hospital, and he probably could not help falling in love with her. We can imagine a naive 18-year old who even thought of marrying her.
Thanks to the discovered photograph, we came one step closer to understanding Kenji’s first love. Maybe this was all for the good, but some may have mixed feelings about it, too.

The blood-colored and warped moon
Rises again tonight above the cherry blossoms,
To the end of the patients’ ward Foretelling ominous signs.
Dark obscurity behind the trees, A frail voice, back and forth,
Black sheep, feverish— Its figure, eerie and strange.
The shaved head, with the salt of Saturn Walked through the columned ward,
To find a white scent of cocaine And a busy doctor passing by.
What’s more, spring maidens All tolerant and smiling,
Counting the mercury graduations, And breaking the crystalline ice. 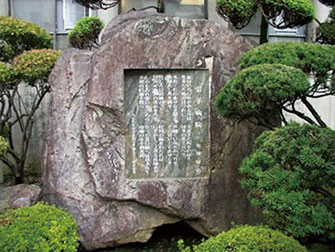 In March 1914, the 19-year-old Kenji Miyazawa had a nose surgery at Iwate Hospital. After the surgery, he stayed in the hospital for two more months for exanthematous typhus. While in the
hospital, he fell in love for the first time with a hospital nurse, and wrote many love poems. “Iwate Hospital,” a classical poem, was written in his bedridden later years.
(Iwate Medical University: 40 Years of History, p.126)